We have a new version of Viewer! You can download it at the home page, or use this direct link. The list of differences includes a lot of things, so let’s take a look at them one by one. 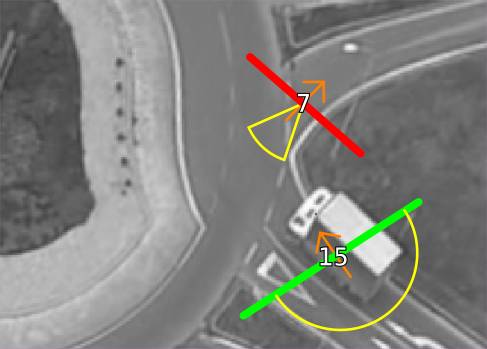 Gates can count objects, and filter them based on their type. When we had to cope with chaos on the road in both directions, we added directionality. But sometimes all objects come chaotically from all directions, such as pedestrians. What then?

We now added a new setting for gates, where it is possible to select the angles under which objects must come. If their direction falls outside this angular range, the gate will not register them. With this functionality it is possible to handle yet another level of chaos and uncertainty, should you chance to record such behaviour.

On the left is a mock picture of the concept. Both gates have directionality set. The entry gate (15) has angular sensitivity of 90 degrees and the exit gate (7) has angular sensitivity of 15 degrees. Without directionality, the cones that depict the angle ranges would be on both sides. Note that angle of 90° means a right angle on both left and right: A bi-directional gate with angle of 90° (both default values) in fact accepts 180° on both sides, or 360°, and does not discriminate at all. 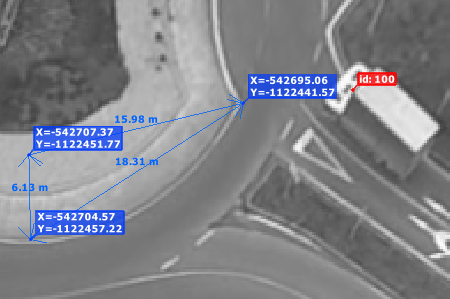 Now, DataFromSky Viewer users can measure exact distances between two or more points – even if there’s no road. This function is particularly helpful for a traffic engineer. To start using the new distance measuring tool, right click on any point on the image, and select “add point”. Then define another point on the image in the same way, and you will see the distance between them.

The precision depends on the quality of geo-registration procedure, but it is often better than 40 centimeters. The distances are showed in meters. You can also add multiple points to measure distances between them. If you make a mistake, select the point and move it on the right position. 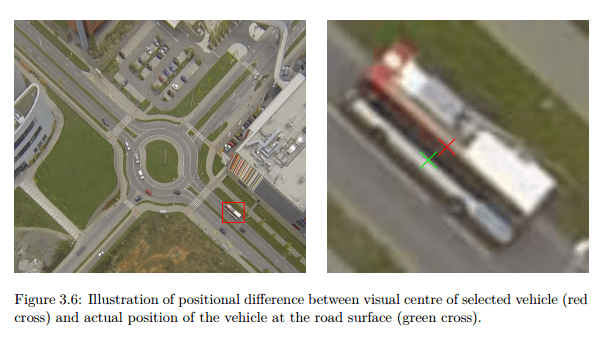 This is not a feature of Viewer, but yet another good news, so here we go! We silently added this in the last months and forgot to mention it. We now project vehicle definition points onto ground. Typically, they lie in the visual center, but not actual vehicle center. This may not seem like much of a difference, but we missed somewhere between 0.2 to 1 meter that way! More importantly, this error is not homogeneous in any practical way, only for vehicles of the same height at the same place. Given that we meticulously correct for perspective and other factors, losing so much precision was not an option – particularly now that we started systematic work on precision and error quantification and improvement.

Speed is something that one expects naturally from modern computers and software. This is not always possible with lots of visual data, as in our case, but not always impossible either! Now that we are working on (and with) Viewer in earnest, we focused on speed as well. Believe it or not, but sending numbers to show in the old vehicle list turned out to be a drag. Another thing that ended up significantly faster was drawing all the lines, shapes, notes, boxes and texts on top of the video. Apart from this we changed a lot how the Viewer handles video under the hood.

We are confident that you will like how speedy the Viewer turned out, compared to how it was before!

Apart from the visible things, many bugs were fixed.

The default download link is for 64-bit Windows. If you need a 32-bit version, get this one instead.